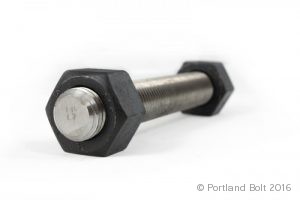 One of the most common fasteners sold in the construction industry is a B7 stud.  These short, fully threaded rods are typically nutted on each end. The other grades within the A193 specification are also readily available in the form of a fully threaded stud. Studs are often measured “first to first” meaning the length of the rod is measured from the first fully formed thread on one end to the first fully formed thread on the other end (excluding the chamfers).  Stud lengths can also be measured “overall”, where the chamfered ends are included in the length of the stud.

Twelve foot (12’) lengths of all thread rod conforming to the various grades within the A193 specification are mass produced and readily available in the marketplace in both domestic and import.  Most studs are cut, chamfered, and stamped with the manufacturer’s logo and grade symbol from these 12’ lengths. Certain sizes and lengths, especially in large quantities, will be manufactured from scratch instead of cut from long lengths of all thread rod. 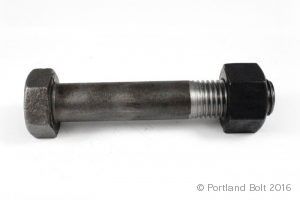 In addition to studs, heavy hex bolts are an extremely common fastener configuration of all grades within the A193 specification. These bolts are typically short due to their application and have a larger (heavy) hex head than normal hex bolts.  Headed bolt lengths are measured from the underside of the head to the end of the threads.  Dimensional requirements for heavy hex bolts are covered under the ASME B18.2.1 specification. 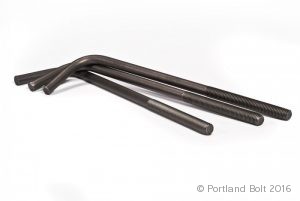 ASTM A193 does not restrict the configuration of bolts within the specification. Therefore, rods with thread on each end, U-bolts, hook bolts, anchor bolts, and other styles of headed bolts are often used on construction projects.  However, the application of A193 bolts is very specific, and according to ASTM, A193 bolts are to be used “for pressure vessels, valves, ﬂanges, and ﬁttings for high temperature or high pressure service, or other special purpose applications.” Although “special purpose applications” is somewhat ambiguous, A193 bolts are technically not intended to be used as anchor bolts or where alternate specifications such as F1554 Grade 105 or A354 Grade BC should be considered.

The F1554 specification covers headed, bent, or straight anchor bolts and anchor rods.  Although there are three different grades of F1554 anchor bolts, Grade 105 is very similar in both chemistry and strength to A193 Grade B7. Therefore, F1554 Grade 105 may be a more appropriate specification for engineers designing anchor bolts but looking for similar strength and chemical properties as A193 Grade B7.  Contractors should consult with the Engineer of Record before making any grade substitutions.

F1554 anchor bolts possess coarse threads over 1” diameter, whereas A193 bolts require 8 threads per inch (unless otherwise specified).  8UN threads are typically not necessary for anchor bolts applications.  For this reason, using the F1554 specification in lieu of A193 Grade B7 has the following advantages for anchor bolts larger than 1” diameter:

The A354 specification contains two grades and is intended for general applications.  A354 Grade BC bolts possess strength and chemical requirements that are very similar to A193 Grade B7. Therefore, when bolts are not intended for use in a high pressure/high temperature application and 8UN threads are not necessary for diameters over 1”, engineers may want to consider this specification instead of A193 Grade B7 due the same advantages listed when substituting F1554 Grade 105 anchor bolts.  As mentioned previously, contractors should consult with the Engineer of Record before making any grade substitutions.

Brevan Daniel, Sales Representative at Portland Bolt, is an expert on the ASTM A193 specification. Contact Brevan by phone, through our form, by email, or via chat if you have any questions.

This website is owned and operated by Portland Bolt and Manufacturing Company. The intent of this site is to provide engineers, contractors, fabricators, and original equipment manufacturers with in-depth, technical information pertaining to the ASTM A193 specification. Please contact us if you have questions, require additional information, need a price quote, or would like to place an order. For more information regarding Portland Bolt's manufacturing capabilities and full product line, visit www.portlandbolt.com.

ASTM: If you are working with A193 heavy hex bolts and studs on a regular basis, we strongly recommend purchasing a copy of the ASTM A193 specification and ASTM A962 specification from ASTM International.

ASME: ASME B18.2.1 which covers heavy hex bolt dimensions, and ASME B1.1 which provides dimensional criteria for both UNC and 8UN threads can be purchased from Techstreet.