The two most common forms of A193 bolts manufactured, stocked, sold, and purchased in the marketplace are either fully threaded studs or heavy hex bolts. “B7 studs” are the most common product used within this specification. Engineers will specify other configurations of fasteners under the A193 specification, but they are far less frequent. The following labor operations are involved in producing fully threaded rods, heavy hex bolts, and other forms of fasteners including bent bolts.

Fully threaded studs, or simply “studs” as they are most frequently called, are a continuously threaded straight piece of steel. Studs have a variety of alternate names and acronyms including TFL studs (thread full length), ATR (all thread rod), TS (threaded studs), threaded rods, and redi-rod. Studs are nutted on both ends and used in a variety of applications.

The vast majority of studs sold in the marketplace are cut and chamfered from longer lengths of mass-produced all thread rods. Under this scenario, 12’ lengths of B7, B8, B8m, or other grades of A193 threaded rod are manufactured by taking pitch diameter round bar and passing it through cylindrical threading dies which displace the steel and “rolls” the threads onto the rod. Grade B7 is threaded in a heat-treated condition. These 12’ lengths of all thread rod are stocked by fastener manufacturers and distributors who cut the studs to length, chamfer them, and stamp them with the grade symbol and manufacturer’s identifier when an order is placed.

Fully threaded studs, when ordered in large quantities, are sometimes processed differently than in the scenario described above. Round bar is first cut to length and then run through a cylindrical roll threader. When processed in this order, chamfering may not be necessary due to the burnishing effect on the end of the threads. Stamping of the grade symbol and manufacturer’s mark is applied after threading. Companies that produce short, threaded studs in this manner are the same companies that service the fastener industry with 12’ lengths of all thread. The number of companies possessing thread rollers capable of producing all thread rod in this fashion is limited. 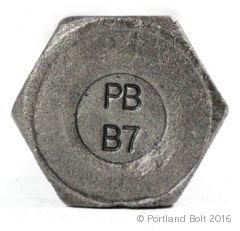 Heavy hex bolts have a hexagonal head forged on one end, are threaded on the other end, and fastened with a single heavy hex nut. There are many applications in which heavy hex bolts and studs can be used interchangeably, but any substitution of one for the other should be approved by the Engineer of Record. Unlike nuts on the ends of studs, forged heads cannot loosen and may be a better option when the potential for nuts backing off is high. Heavy hex bolts are cut to length, headed, threaded, chamfered, heat treated or solution annealed, and mechanically tested.  A cold heading process is used to mass-produce common sized heavy hex bolts, while a hot forging process is used for nonstandard sizes that are typically larger in diameter or longer in length than sizes that are readily available in the marketplace.

Cold headed bolts are produced in a similar fashion to hot forged bolts, but the heads are formed at room temperature rather than being heated. Cold headed bolts are mass-produced by machinery and not handled through each labor operation as is the case with hot forged bolts.  Huge coils of steel wire are fed into a straightener before being sheared to length. Next, they are fed through a series of dies that gradually form the heavy hex head. The area of the headed blanks to be threaded is extruded down to a pitch diameter before being roll threaded. The bolts are then solution annealed or quenched and tempered before being mechanically tested. 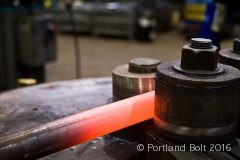 The A193 specification is not limited to heavy hex bolts and studs, although other configurations are specified far less frequently. Bent bolts of various styles are occasionally manufactured to meet the requirements of the A193 specification, especially in the stainless grades B8 and B8M. Bent products include round and square U-bolts, right angle anchor bolts, round and square hook bolts, and eye bolts.

During the manufacturing of these products, the round bar is cut, threaded and then bent into the proper configuration. The bolts can be heated and bent or bent at room temperature. When heated to facilitate bending and depending on the grade, the bolts will undergo a heat treating or solution annealing process after bending.

Grades of A193 bolts that are not made from stainless steel, are occasionally treated with a corrosion-resistant coating. The most common process is hot-dip galvanizing, in which zinc is metallurgically bonded to the steel. Before being galvanized, the bolts are cleaned. Bolts with excessive mill or heat treating scale are wheelabrated.  Bolts without excessive scale will skip this preparation process.  Bolts are then submerged in caustic soda to remove cutting oil and grime picked up during the manufacturing process. The bolts are then rinsed and dipped in sulfuric acid to remove any remaining scale and etch the surface of the bolts, allowing the zinc to adhere. Finally the bolts are rinsed and submered in flux, a chemical that assists in the bonding of the zinc to the steel. 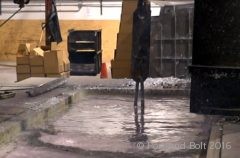 Now that the bolts are thoroughly cleaned, they ready to be “dipped” in an 840 degree tank of molten zinc.  Once the bolts have been submerged long enough (a few minutes) to build up the proper coating thickness, they are removed from the galvanizing tank and spun in a high speed centrifuge to remove the excess zinc from the bolts and threads. ASTM specification F2329 covers the hot-dip galvanizing of threaded fasteners. Other corrosion-resistant coatings include Xylan, Teflon, PTFE, zinc aluminum, mechanical galvanizing, zinc plating, and cadmium plating.

Brevan Daniel, Sales Representative at Portland Bolt, is an expert on the ASTM A193 specification. Contact Brevan by phone, through our form, by email, or via chat if you have any questions.

This website is owned and operated by Portland Bolt and Manufacturing Company. The intent of this site is to provide engineers, contractors, fabricators, and original equipment manufacturers with in-depth, technical information pertaining to the ASTM A193 specification. Please contact us if you have questions, require additional information, need a price quote, or would like to place an order. For more information regarding Portland Bolt's manufacturing capabilities and full product line, visit www.portlandbolt.com.

ASTM: If you are working with A193 heavy hex bolts and studs on a regular basis, we strongly recommend purchasing a copy of the ASTM A193 specification and ASTM A962 specification from ASTM International.

ASME: ASME B18.2.1 which covers heavy hex bolt dimensions, and ASME B1.1 which provides dimensional criteria for both UNC and 8UN threads can be purchased from Techstreet.